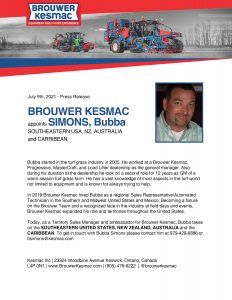 Bubba started in the turf grass industry in 2005. He worked at a Brouwer Kesmac,

Progressive, MasterCraft, and Load Lifter dealership as the general manager. Also during his duration at the dealership he took on a second role for 12 years as GM of a warm season turf grass farm. He has a vast knowledge of most aspects in the turf world not limited to equipment and is known for always trying to help.

Technician in the Southern and Midwest United States and Mexico. Becoming a fixture on the Brouwer Team and a recognized face in the industry at field days and events, Brouwer Kesmac expanded his role and territories throughout the United States.

Today, as a Territory Sales Manager and ambassador for Brouwer Kesmac, Bubba takes on the Southeastern United States, New Zealand, Australia and the Caribbean. To get in touch with Bubba Simons please contact him at 979-429-6886 or bsimons@kesmac.com

We aren’t able to process your payment. Please, try again.

Thank you for your request!
Your confirmation number: